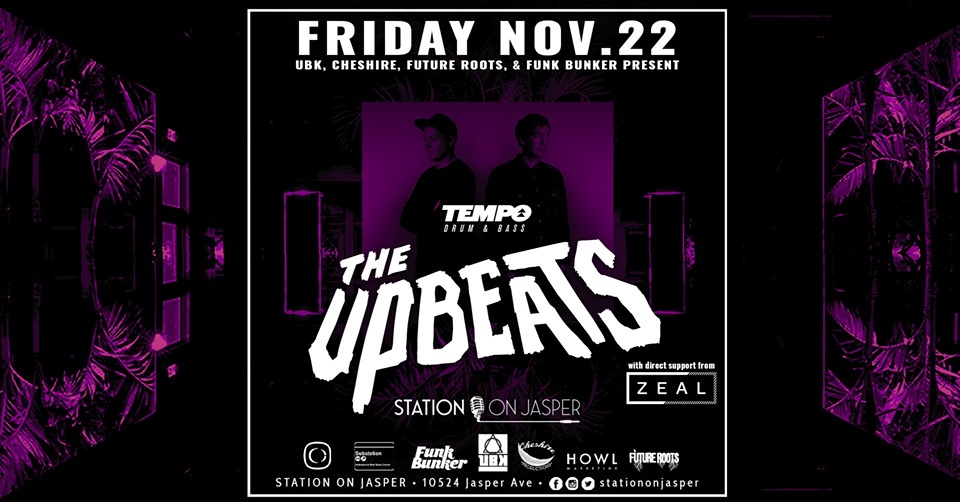 with direct support from

The Upbeats’ unique and organic take on 170bpm+ bass music has seen them make their home in the highest echelons of dance music worldwide. Known for their organic and natural sounding drums, The Upbeats are a pillar in the DNB community. The duo have collaborated with stalwarts such as Noisia, Shapeshifter Bad Company,Foreign Beggars, Mara TK, and Mefjus to name a few. In September 2014, their collaborative EP with Shapeshifter, ‘Bloodstream’, reached no.1 in the NZ iTunes Charts 2 days after being released. They have released on major dnb labels including RAM Records, Virus, Blackout and Vision Recordings along with remixing heavy weights such as Ed Rush & Optical, Black Sun Empire, Noisia, andBad Company. Their album ‘Beyond Reality’ released on Vision records in 2013 propelled them to the highest ranks of drum and bass globally. 2014 saw them remix Submotion Orchestra’s single, ‘Trust Lust’, for Counter Records/Ninja Tune which was widely praised inside and outside of the dnb world. In August 2015, they released a new collaborative EP, ‘Dead Limit’ with Noisia, which turned the entire scene on its head. The title track won them best track at the DNB Arena Awards and quickly became a modern classic. It is almost impossible to go to a rave and not hear the track being played multiple times during a night. Over 2016, they released the first two segments of their latest album ‘De-Evolution’. The final segment, Part III, was released in Q1 of 2017 to much acclaim. In September 2017, the highly anticipated Re-Evolution (the remix package featuring Black Sun Empire, Emperor, Malux, Memtrix, Annix and Aggressor Bunx) was released. Now, in November 2017, The Upbeats have released their first 4 track EP with Critical Music - the PUNKS EP. It has received heavy rotation from all of their peers, and has been played numerous times on BBC Radio 1, and has also seen them do a 2 hour special for Critical Music on Rinse FM. 2018 saw them release a 4 track EP (The Pack) with fellow New Zealanders ‘Truth’. The EP sat at the top of the Beatport charts for many weeks. It also saw a resulting tour of Australia and New Zealand where 90% of the 18 shows sold out. The Upbeats have also just released another EP on Critical Music, which has found rotation on BBC Radio 1. The Upbeats have now also had repeated Summer residencies on New Zealand’s own George FM. 2018 saw them release the first 2 releases in the series of their highly anticipated ‘No Sleep ’Til’ EP. They travelled to Japan and Iceland with a bunch of the most respected artists in drum and bass (Noisia, Culture Shock, Halogenix, Emperor), and also worked with Goth Trad and the highly respected DJ Kentaro in Tokyo where they were guests of the Red Bull Studio there. The release is out on the 7th September 2018. 2019 has already been a big year with the release of AA side ‘Sweeper / Disorder and a ‘No Sleep Til… New Zealand’ in the pipeline. Clocking up over a hundred shows a year The Upbeats have played at major festivals worldwide including EDC (Vegas), Pukkelpop (Belgium), Urban Art Forms (Vienna), Supersonic (India), Exit Festival (Serbia), Outlook Festival (Croatia) and are a staple at the famous Noisia Invites shows and tours, Northern Bass (NZ), Boomtown (UK), Glastonbury (UK), Shambhala (Canada), Origin (Australia).

with direct support from

Zeal, a name synonymous with creative expression through sound. Jason, a Canadian-born electronic music visionary has found his production niche in bass music. Through the diverse sounds of liquid funk and future bass, his passions and innovative drive translate into everything he procures. His creative influences range from Fred V & Grafix, Camo & Krooked, Metrik, Etherwood, Keeno, KRNE all the way to Porter Robinson. Wherever there is emotional energy, there is Zeal. Trophying a release through RAM Records imprint ProgRAM Music, and his recent inclusion on Viper Recording's Bassrush 2.0, the sky is the limit for this ambitious new producer. You can also catch him releasing with The Database, a drum and bass producer collective out of Los Angeles. Constructing a diverse, yet entirely cohesive narrative through music alone isn’t ever an easy feat. Some artists consider it nearly impossible. To some though, life’s beauties pave the way in the search for discovering not only yourself, but yourself through musical expression. Zeal is exemplified through the emotions told by his production. By wearing his productions like a heart on his sleeve, this bass music prodigy will soon share his story with the world.