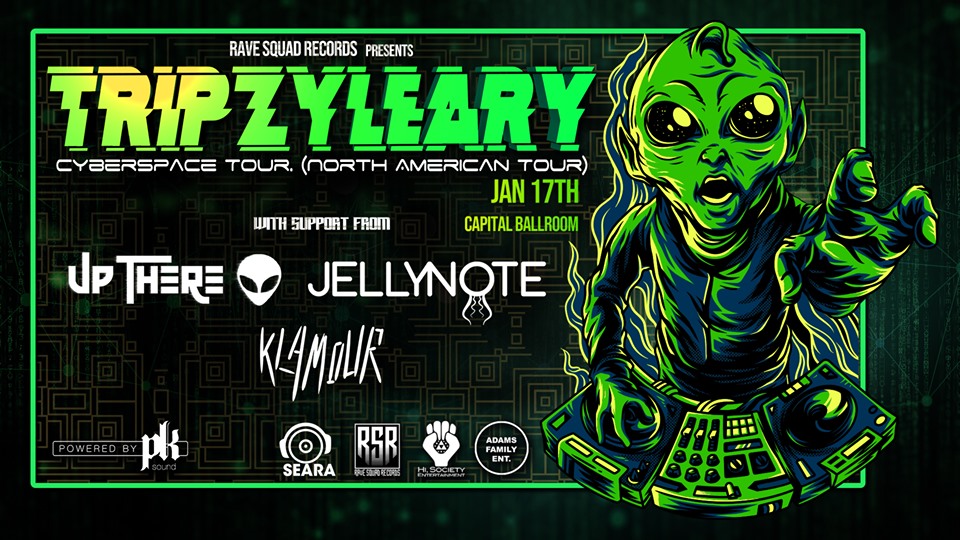 Introduces us to his latest pallet of mind altering frequencies this 2020. Still buzzing from the release on Liquid Stranger’s WAKAAN label with Arrival alongside GDubz, and Tripzy Leary's 2019 USA tour with the Space Migration LP. Now dials in the coordinates for his biggest tour yet, The Cyberspace Tour (North American Tour). Prepare your self for a new body of work as Tripzy Leary is about to release a new album.

On the billion year voyage to higher intelligence, the Cyberdelics federation seek out planets with evolutionary delay, dismantling any political forces who deceptively manipulate a specific species of DNA seeded across the universe. In this tour, Tripzy Leary tells the story of the cyber-pilots’ journey to their space migration destination and their findings.

During this psychedelic trip to outer-space, we’re greeted with rumbling wubs and sonic vibrations in Departure that will rattle the darkest depths of unearthly galaxies and beyond. Elsewhere, Access Granted touches on modern day technology drawing on social media vocal samples amongst a bubbling bassline. Continuing the voyage, Tripzy Leary spans a landscape of intricate sound designs, with some cleverly crafted productions to mimic the likes of UFOs, aliens, space transport and the general ambience of an eerie universe. Force Field and Game Over depart from the experimental bass realms and delves into a genre bender, with upbeat rhythms and grooving drum lines that draw on bass house and trap. Overall, This show will well and truly take us to celestial dimensions that span a new level of mind bending discoveries.

You can expect to find the ET - Tripzy Leary in his studio laboratory where the magic of his otherworldly beats come to life. Designed to vibrate your soul from head to toe, Tripzy is known for morphing alien synaesthesia with rich analogue bass frequencies. Having had an incredible year with a Shambala mix as well as releases on WAKAAN and Dream Vault, Tripzy already has exciting plans in store for 2020. Venture on an interstellar migration to cyberspace, as Tripzy Leary calibrates the final phases to a new universe and navigates us through his Cyberspace tour and Cyberdelics record label.

Born and raised on the Shuswap Lake, young Jellynote was exposed to a wide variety of sounds that little did he know would begin to shape his future musical journey. An avid listener of Hip-Hop and Metal/Post Alternative Rock growing up, his first eye opening experience with Electronic Music came by pure chance. After winning tickets to see EDM pioneer Skrillex, he was instantly drawn to the production and performance that he recalls as being "revolutionary". At this time a bold and adventurous 21 year old Tim had followed his love of snowboarding to Sun Peaks, B.C. It is here that he befriended a resident DJ at the local club who took him under his wing and his DJ/Production career really took flight. Within 6 months he had taken up Ableton and a newly formed addiction to see the reaction of crowds of any size to the songs he had produced or remixed had begun. With a constant dedication to his craft, impeccable timing, diversity and a longing to be part of the progression of experimental bass music, Jellynote was born. His sounds, described as drippy, low end, space age hoodrat beats have captivated fans all across BC and culminated this past year in his first ever appearance at Shambhala Music Festival 2018 on the Amphitheatre stage. Undeniable stage presence and well received releases on highly reputable labels such as MalLabel have him poised to be one of the most exciting up and coming DJ/Producers in Western Canada. Also keep your eyes peeled for the Antidote EP releasing soon!

gReeTiNgZ eArThLiNgZ
"Up There" is a duo composed of two intergalactic homies that you will truly believe are not from this planet!!!
Mind blowing sound design, catchy off beat wubz and just straight up weird alien vibes all around.
Up There has been making waves this year in there UFO stopping at many festivals and clubs along the way, dropping all original sets leaving the crowd wondering "what on earth happened to us?"
Keep your eyes in the sky!!!
Up There might be beaming to a city near you soon!
https://www.facebook.com/upthere840/
https://soundcloud.com/upthere840