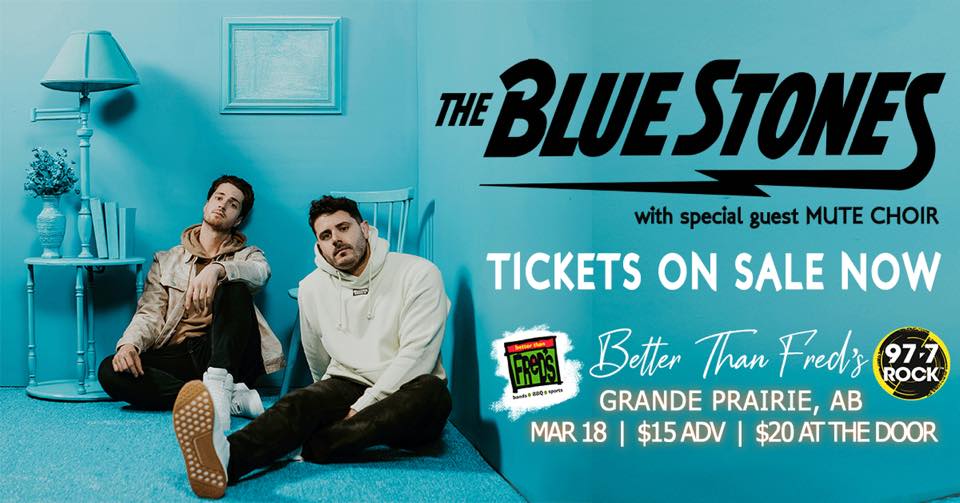 THE BLUE STONES:
When Tarek Jafar and Justin Tessier formed The Blue Stones, they were facing uncertainty about who they were and where they were going. But they did know they wanted to make music together, and so they did, writing songs over time and eventually releasing their debut album Black Holes in 2018. As confident and self-assured as they are, that record was very much about the pair finding themselves, both musically and existentially, and deciding to pursue the rock’n’roll dream by jumping into a black hole of the unknown instead of choosing a more ordinary life-path.
“When we wrote that stuff,” explains Tessier, “we were both finishing undergrad degrees. That album was us trying to figure out who we were. These new songs are more about how we know who we are, but they’re also us learning to come to terms with the dark side of ourselves.”

The band drew the attention of producer, Paul Meany - the creative force behind alternative rock band Mutemath, and who recently worked with Twenty One Pilots, producing their fifth album, Trench. Needless to say, getting Paul involved provided the pair with a huge sense of validation.
“We jokingly suggested him,” chuckles Tessier. “We were shooting for the stars, but a week after our management approached him we found out he was into the band and into us as musicians.”
Working with Meany didn’t just lead to The Blue Stones exploring – and creating – music in a different way than they had before, but it also led Jafar to approach and tackle lyrics in an entirely new light. Combined with the band’s nuanced and layered approach to their sound, it makes these songs resonate with a powerful emotional intensity.

The band will release multiple songs as singles leading into their highly anticipated sophomore album release in 2020. The first of those is ‘Shakin’ Off The Rust’ – a song, as Jafar explains, that very much serves as a mission statement for their renewed sense of confidence and newfound identity.
“There were times along the way where I felt I wasn’t good enough, “ explains Jafar, “or that I didn’t deserve any happiness or success. This song is about battling those thoughts in your head that make you doubt yourself, and coming through with the confidence to make something great.”
That much is clear from listening to the songs that the pair have recorded so far. While ‘Shakin’ Off the Rust’ is probably the closest to the sound the band inhabited on Black Holes, it also represents a clear and profound evolution – it’s more textured, more layered and, yes, more confident than anything on the first record. That’s an idea the pair – Jafar on vocals and guitars, Tessier on percussion and backing vocals – have woven into the fabric of the other new songs. Take, for instance, the restrained, layered, hip-hop-inspired vibes of both ‘Careless’ and ‘Make This Easy’, two songs that would be hard to imagine the band that made Black Holes recording, but which make total sense in terms of their new outlook and approach. Although The Blue Stones were always more than a blues-rock duo, that’s especially true now.

“When we record,” says Tessier, “we really like to dive into a lot of different sounds and use a lot of different instruments that sort of break the boundaries of what a blues-rock duo is.”
“It’s not a conscious thing, though,” adds Jafar. “It’s more an amalgamation of listening to a lot of different types of music over years and years and soaking in that influence subconsciously. And that shows in the songwriting.”
One other difference with this record was Jafar’s lyrical approach - something that was inspired by Meany’s presence during the sessions.
“I never really focused on lyrics before,” admits Jafar. “They were secondary to the music, and I used them just to help the melodies, but now I’m focusing a lot more on what I’m saying and how it’s coming across. When we sent Paul the demos and we started to have a little bit of a conversation back and forth about it, he shined a spotlight on the lyrics and really opened my mind to the narratives of these songs. And I just took it and ran with it.”
The result was not just that The Blue Stones truly discovered who they were while writing these songs, but they’ve crafted something that shimmers with such purity and truth – musically and lyrically – that you can’t help but be swept up and carried off by these songs and what will eventually form the as-yet-untitled album. They’ve redefined who they are, but at the same time ensured they kept their identity intact.
“Even though some of these songs sound different,” says Jafar, “at the end of the day we stayed true to who we are as The Blue Stones. So even if the songs border on a different genre, you’re still going to get us, because it’s still us writing the songs and performing the songs. We have a vision that we’ve been focused on since we started this band and that hasn’t changed. I want the fans to really enjoy and connect with these songs.”
“We both just tried to serve the music the best way we could,” adds Tessier. “And that was by taking out the ego from them. I really want these songs to capture people’s attention. I want them to understand that The Blue Stones are a force.”
https://thebluestonesmusic.com/