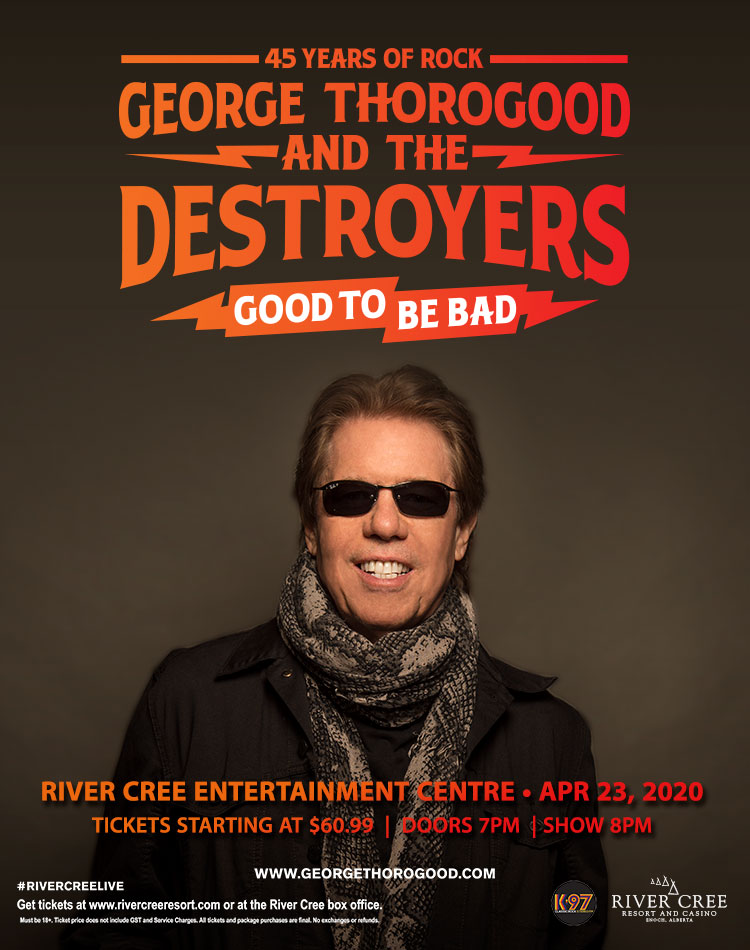 Since 1975, they’ve sold over 15 million albums, built a classic catalog of hits, and played more than 8,000 ferocious live shows. They broke records with their 50 Dates/50 States tour, delivered landmark performances at Live Aid and on SNL, and became mainstays of radio, MTV and stages worldwide for more than two generations. Through it all, they’ve remained one of the most consistent – and consistently passionate – progenitors of blues-based rock in pop culture history.
For the past 45 years, it’s been very good to be George Thorogood & The Destroyers. And in 2020, their Good To Be Bad Tour: 45 Years Of Rock will prove why like never before.

“If you’re content, you may as well be dead.” George laughs with his familiar rasp. “I think everyone has thoughts about retiring, but the phone keeps ringing. You want me and The Destroyers to come to your town, set up our gear, wear some badass clothes and play ‘Who Do You Love?’ End of conversation. Let’s rock!”
For Thorogood and his longtime band – Jeff Simon (drums, percussion), Bill Blough (bass guitar), Jim Suhler (rhythm guitar) and Buddy Leach (saxophone) – the power to rock audiences has been both battle cry and creed from the beginning. “Since I was 17,” George says, “all I wanted to do was see how far I could go with my guitar, putting my own spin on music I loved.” After a few hard years as a solo acoustic performer – a period he would revisit with his acclaimed 2017 album Party Of One – George added a drummer and bass player in 1974 to form the electric trio he called The Destroyers. Built around Thorogood’s fiery guitar skills, explosive performance style and a blistering take on blues rarities, the band began to gain a devout following at college parties around their native Wilmington, Delaware. It was at one of their earliest shows that Thorogood had his live performance epiphany. “It wasn’t about the amount of people we drew, but rather the impression we made,” he remembers. “I asked myself, ‘Are we reaching them? Do they want more?’ And from the very first set we knew that we had something special.”

“George had that drive and charisma when we were 11 years old,” laughs childhood pal and 45-year Destroyer drummer Jeff Simon. “At first, we just enjoyed playing music. Then we had the thought of maybe making a living at it. We always believed that if we played great songs and stayed true to ourselves, people would keep coming back.” The band soon became a sensation throughout the Delaware Valley and New England club circuit, and in 1976 signed with Cambridge-based label Rounder Records. Over the course of 16 studio albums – including two Platinum and six Gold discs on Rounder, EMI and Capitol – Thorogood and The Destroyers toured the globe, as Rolling Stone once raved, “playing rock & roll hot enough to melt the polar icecaps and flood the world’s major population centers.” “We’re on a very short list of bands that are still having fun doing this,” Jeff says. “And we’re still looking over our shoulders thinking that somebody will catch us at it.”

Thorogood & The Destroyers indeed remain unstoppable. In the past few years alone, the band released a top-selling limited edition 7” single for Record Store Day, saw the re-issues of their legendary Bad To The Bone, Born To Be Bad and Greatest Hits: 30 Years Of Rock albums on180-gram colored vinyl, and performed over 70 dates throughout North America on their sold-out Rock Party Tour. Thorogood himself received the 2018 B.B. King Award from The Montreal International Jazz Festival, and his Party Of One album – which critics called “brilliant” (Spin), “electrifying” (Guitar Player) and “chock full of classics” (Music Connection) – became George’s fastest-selling disc in over 20 years. “I was meaning to make that record ever since I first picked up an acoustic guitar,” he says. “It was special and I’m really proud of it, but there won’t be a Party of One/Part Two. Once it was done, I grabbed my electric guitar and said to the band, ‘C’mon boys, let’s get back on the road.’”

It’s on tour that George & The Destroyers flip the switch nightly, delivering what The Toledo Blade calls “a gut-bustin’, guitar-wailin’, face-meltin’, fiery-tempoed, take-no-prisoners, good old-fashioned lunch-bucket rock & roll show” that includes their signature hits “Get A Haircut”, “I Drink Alone”, “One Bourbon, One Scotch, One Beer”, “Move It On Over”, “Who Do You Love” and the definitive badass anthem “Bad To The Bone”, along with several surprises. “George has been honing the set list since our bar band days,” explains 43-year Destroyer bassist Bill Blough. “It’s been a constant evolution to make it all killer, no filler. We hear our walk-on song, the lights go down, and something still inherently clicks the second we step on stage. We feel the audience’s energy and the show just explodes.”

And as in past years, a portion of proceeds from every date on the Good To Be Bad Tour will benefit the Leukemia & Lymphoma Society. “Now we’re talking about something that’s really important,” George says. “When I was a kid I remember Robert F. Kennedy saying, ‘Some people see things as they are and ask why. I dream things that never were and ask why not?’ That still gives me the chills today. Don’t tell me to slow down or turn down, but if The Destroyers and I can help make a difference in any way, shape or form, we’re there.”

But after 45 years of rock – and no signs of stopping – can Thorogood point to what continues to make it all matter? “My highlight is every night when I walk on that stage and play our hits for those happy people,” he says. “At the end of the show, the audience is smiling, I don’t see any police and everyone got their money’s worth.”
More importantly, is it still good to be bad? George Thorogood instantly flashes that huge grin. “You bet it is,” he says. ”We’ll always be the baddest band in the land. Expect our best on this tour, because that’s what you’re gonna get.”