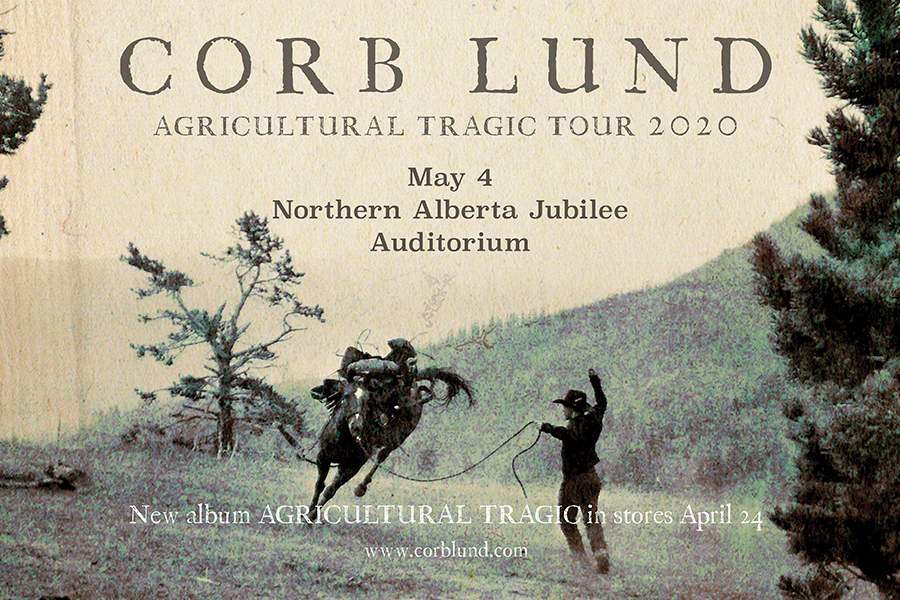 Corb Lund is set to release his first album of original material in five years, Agricultural Tragic, on April 24. The album’s first single, “90 Seconds Of Your Time,” is available today.

Along with today’s album news, Lund announces a 25-date Canadian tour, set to begin April 27 in Victoria, BC. A full list of dates can be found below. The show will be bigger and better than ever, with newly added production elements, as well as VIP packages including a meet and greet and acoustic performance, available at corblund.com.

Of the new music, Lund says “I worked really hard on this album—harder than I’ve ever worked before. This time around I took my time and wrote more songs, rehearsed more with the band, and explored sounds much more deeply. It took some time, but I’m really proud of this one and I’m excited to finally be able to share it.”

Agricultural Tragic is a record with instantly detectible depth and energy. Its title draws a taut thread backwards in time through Waylon, Williams — even before Robert Johnson — to that pre-fenced and perilous era of exchange between untamed infinity and we humans striving to make this land ours, using heart, hope and horses.

The album’s title, Agricultural Tragic, is also the name of Lund’s self-applied subgenre. While examining his own body of work, he noticed and wryly named this larger narrative string of rural adversities. So-called “Ag-Trag” themes continue to feature prominently in Lund’s latest songwriting, thus leading him to choose Agricultural Tragic for the name of his 10th full-length studio album.

A rural Albertan hailing from the foothills of the Rocky Mountains with a long family lineage of ranchers and rodeo people, Lund is about as authentic as they come. Before his current bandleader incarnation with the Hurtin’ Albertans, Lund was an integral part of the smalls, a legendary Canadian indie rock band who didn’t quite fit into any single category, either, mixing punk, speed metal, jazz and — indeed — country. Embracing both his Western heritage and his indie rock past through his music, Lund has been known to filter a range of cowboy themes past and present through his unique lens - from rough-and-tumble tales of lawless frontier saloons, to the somber realities of running a modern family ranch.