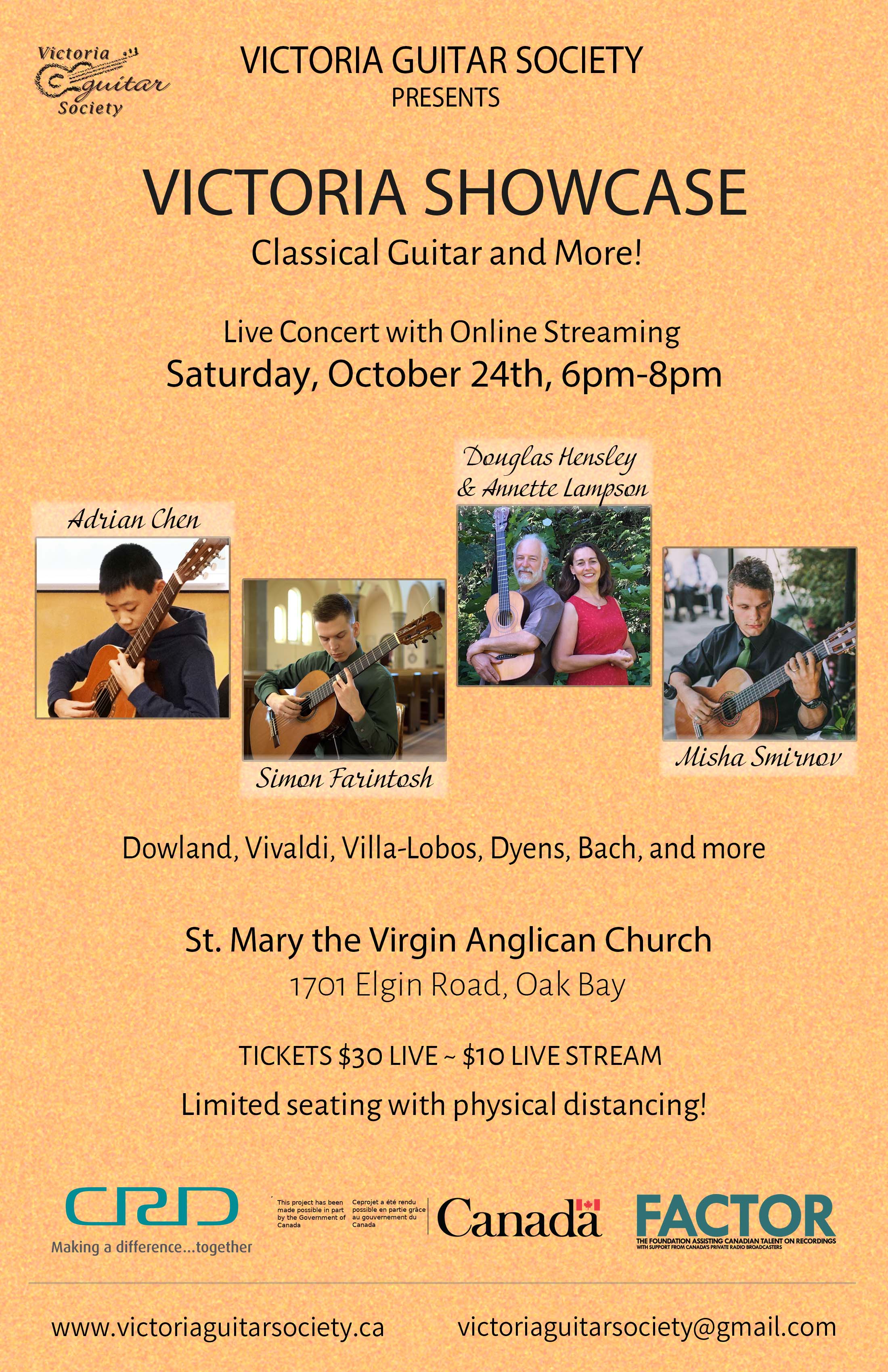 "The Victoria Guitar Society is excited to present a showcase of diverse repertoire performed by local talent as its postponed season-end concert . From Renaissance and Baroque favourites and early vocal music, through the development of solo guitar repertoire to contemporary Cuban and Russian guitar composers, this programme has something for every music lover.

ADRIAN CHEN is an aspiring young classical guitarist currently studying under Dr. Alexander Dunn. Prior to winning the Performing Arts BC Festival in 2019, Adrian won first prize in the Greater Victoria Performing Arts Festival for the past three years. Having performed at several Performing Arts BC highlight concerts, he received the Susan and Colin Boyer Bursary from the Victoria Conservatory of Music in 2019 for his talent and passion to pursue his musical studies.

SIMON FARINTOSH will begin his Doctorate of Musical Arts Degree at the University of Toronto and has garnered top awards at various competitions in Canada and the US, including 1st Prize at the 2018 Northwest Guitar Festival & Competition and 1st Prize at the 2020 Quebec International Music Competition. He is a four-time recipient of the British Columbia Arts Council Award, and has been a featured artist for the VCM Summer Guitar Academy (BC), The Classical Guitar Society of Tri-Cities (WA) and Madison Classical Guitar Society (WI).

Russian born MISHA SMIRNOV began studying classical guitar at age 10 and broadened his musical education by performing in varying styles on classical and electric guitars. He studied under Michael Strutt at the University of British Columbia and graduated with a Bachelor of Music in classical guitar performance in 2009. Misha was a prizewinner in the Northwest Guitar Festival in 2017.

A graduate of the San Francisco Conservatory of Music, DOUGLAS HENSLEY has studied classical Persian music with several Iranian masters in California and Paris. He has worked with many ensembles including the Symphony Orchestras of San Francisco, Berkeley and Marin.  He co-founded and co-directed several music ensembles including ISKRA with conductor Kent Nagano and the Continuum Consort and has recorded, on several labels, a wide variety of pieces for classical and electric guitars, lutes, viola da pendola, oud, and setâr.

Born and raised in Scandinavia, ANNETTE LAMPSON studied Voice and Choral Conducting in England and Germany, where the study and performance of Folk Song through the ages and in original languages became a special interest. She has performed as a soloist in Canada since 1995, including appearances with the Continuum Consort and as part of Ensemble Laude since 2003.