About The Drake Hotel:

For more than 40 years, they've been a part of the east Edmonton landscape. The Drake Hotel and the Beverly Crest Motor Hotel are more than just places to stay - they're places of gathering and celebration that have become integral parts of the Beverly story.

When the Drake Hotel officially opened May 26, 1950, it was touted as proof that as far as Beverly is concerned, the boom is on. The two-storey frame and stucco building featured 20 rooms built on an L shaped floor plan to give all rooms outward facing windows, a lobby, coffee shop and separate beverage rooms for men and women. Rough cedar planks covered the bottom of the north and west exterior walls, with canopies over all entrances and the famous vertical H-O-T-E-L sign prominent on the second level near the front corner.

Named for the male Mallard ducks that frequented a large slough nearby, the site of the hotel at the southeast corner of 40th Street and 118th Avenue was one of the most popular in the town right from the beginning. Recollections of early settlers say a livery stable was on the property at the time of the early mines. Later, the post office and then a half finished retail development stood on this spot.

The Drake Hotel was developed by a group of Edmonton businessmen and, as a May 25, 1950 Edmonton Journal article proclaimed, it was the quality of accommodation and appealing decor that made it so attractive. Real feature of the Drake rooms is the high quality mattresses and springs. Sleeping comfort is assured every guest. All rooms are fitted with running water and all afford clothes closet space.

The hotel again made the news two years later when $10,000 was allegedly taken by two masked and armed robbers in a heist at 2 am the morning of September 21, 1953. Night clerk Metro Westrouk was bound and gagged and the two blew the safe with explosives. The bandits fled into the night with $3,000 to $4,000 cash and cheques for $6,800. Beverly Police Chief A. McIhargey described the safe cracking as the work of experts and said it was obviously a well-planned job as the thieves knew where to find the key to the office after binding the clerk.

In 1964, a bar with separate Men's and Ladies' and Escorts sections was added to the rear of the existing hotel. Over the years, the hotel has changed hands five times and the current owner, Earl Bolichowski, purchased the hotel on May 21, 1972 investing the insurance money he received when the old Donald Hotel in Grande Prairie burned to the ground.

The 1960 announcement of the planned construction of a new hotel between 34 and 36 Streets along the north side of 118 Avenue generated much excitement in the community. The new hotel was to supply a minimum of 20 new jobs.

Owned by brothers William and Joe Lutsky and Wolfy Margolis, the Beverly Crest Motor Hotel was completed in 1961 and the official opening came the following spring. It wasn't an easy time, the hours were long and the work was hard, Joe recalls. But I guess we did alright.

Designed by the Edmonton architectural firm Hemingway and Laubental, the 42-room hotel was acclaimed for its extensive use of plate glass, which lent the lobby an air of spaciousness, according to one newspaper account. The hotel is designed as far as possible on one level, the article continued, the exception being the downstairs banqueting rooms and one floor of bedrooms on the second floor reached by a wide, gently rising staircase. The design has thus eliminated the necessity of elevators a necessary convenience in most hotels.

Popular country music star Gaby Haas and his group played from two until five opening afternoon and the event was broadcast live on CFRN Radio. Instead of pictures, every room boasted a wall mural. The general contractor was K. Vollan Limited, the Edmonton firm that also built many Beverly schools during the 1950s.

From the beginning, the hotel was known by locals as The Crest. Over the years, it has been renowned for its entertainment, its smorgasbord and its friendly community atmosphere. Lorraine Trudeau started working at the hotel in 1962 and she remembers the early days with fondness. It was such a busy time; there were just 42 rooms then and the banquet business was very good. You got to know people because they came back again and again.

Ernie Mekechuk came on the scene as manager in 1976 and he and a new group of investors launched a $3.2 million expansion the next year. The project, completed in 1978, added 50-rooms, expanded the existing amenities and upgraded and redecorated the rooms and common areas. 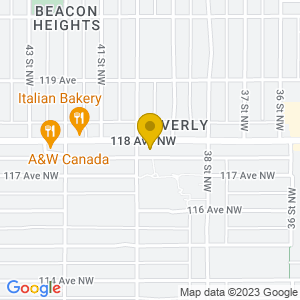